Most of the Color Tops figures had a RRP between AUD$34 to AUD$49. Some figures can be found in abundance and these are priced accordingly. Most of these figures are now over $50 each and some regularly go for well over $500 each. 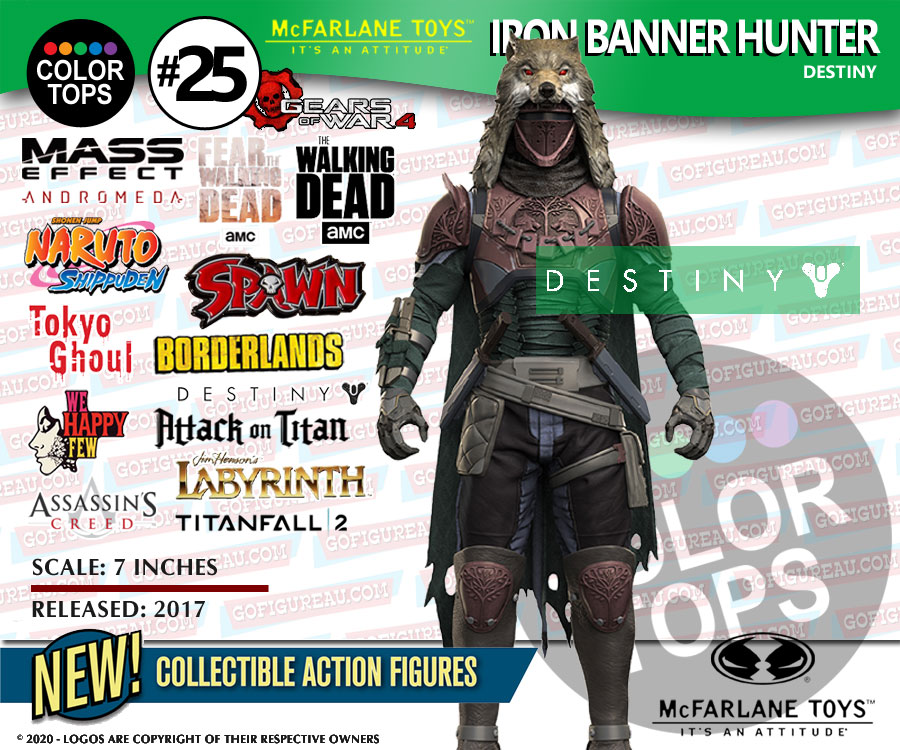 Hunters stalk the wilderness beyond the city, harnessing the Light to reclaim the secrets of our lost worlds. They are daring scouts and stealthy killers, expert with knives and precision weapons. Hunters blaze their own trails and write their own laws.

Masters of the frontier, quick on the trigger and deadly with a blade, Hunters stalk battlefields as if they were hunting prey. Cunning and ruthless, they prize the undiscovered and prepare for the unexpected, channeling their powers by intuition and gut instinct. 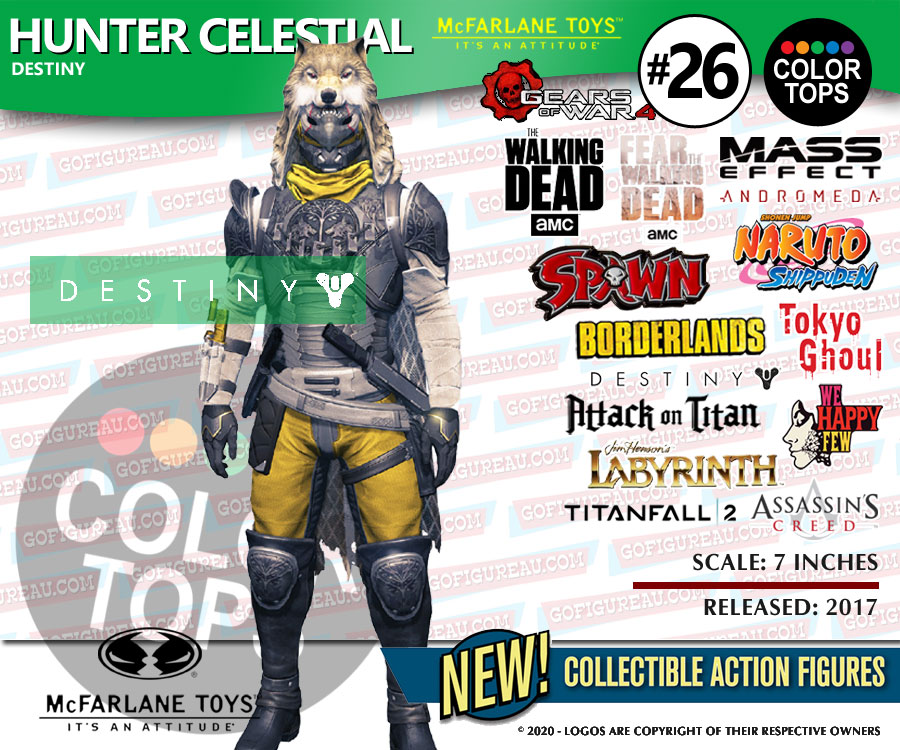 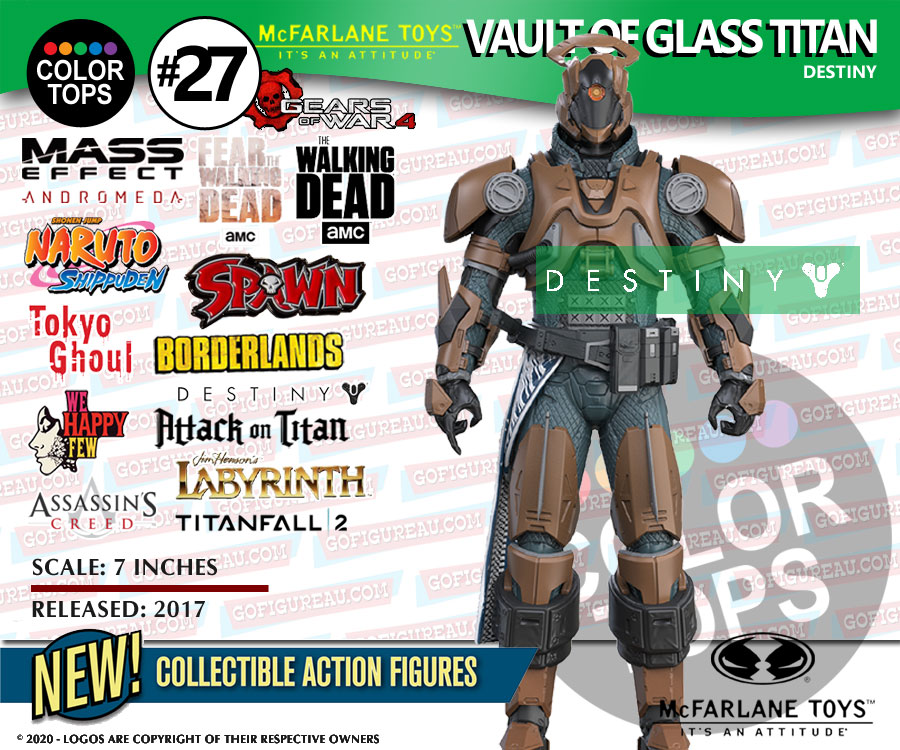 Titans are warriors – heroic defenders of the Light, channeling the gifts of the Traveler to wage war on the Darkness. Steadfast and sure, Titans face any challenge head-on, blunt force instruments of the Traveler’s will.

Armored engines of war, their lightning-charged fists will knock you off your feet, armor and shields make them nearly invincible. Faceless knights protecting us from our countless enemies, but their power and resolve gives them the air of rising gods. 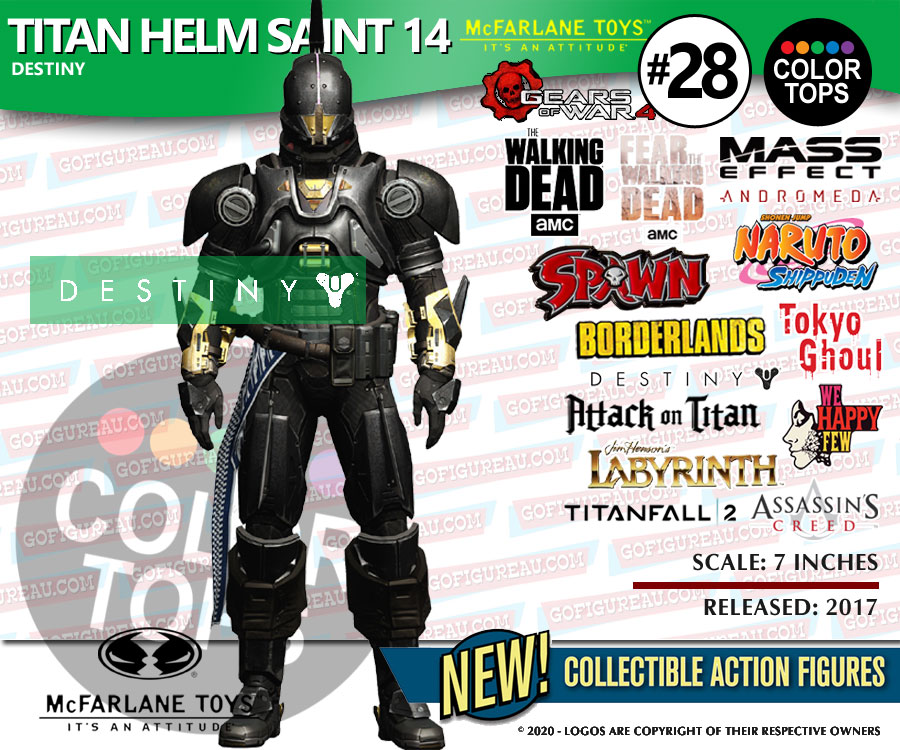 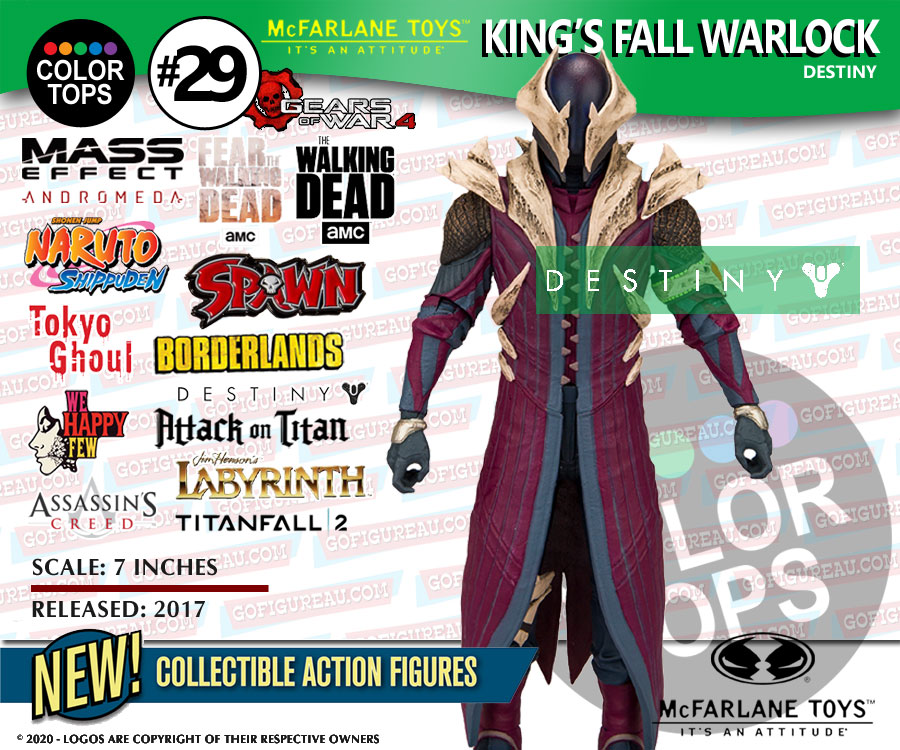 Warrior-scholars of the Light, Warlocks devote themselves to understanding the Traveler and its power. A Warlock’s mind is an arsenal of deadly secrets, balanced between god-hood and madness. On the battlefield, those secrets can shatter reality itself.

Wielders of arcane power, they’ve found a way to weaponize their curiosity, harnessing the Traveler’s light in patterns never before imagined. Warlocks are not passive scholars of the unknown. These are mystic warriors, capable of incredible acts of devastation. 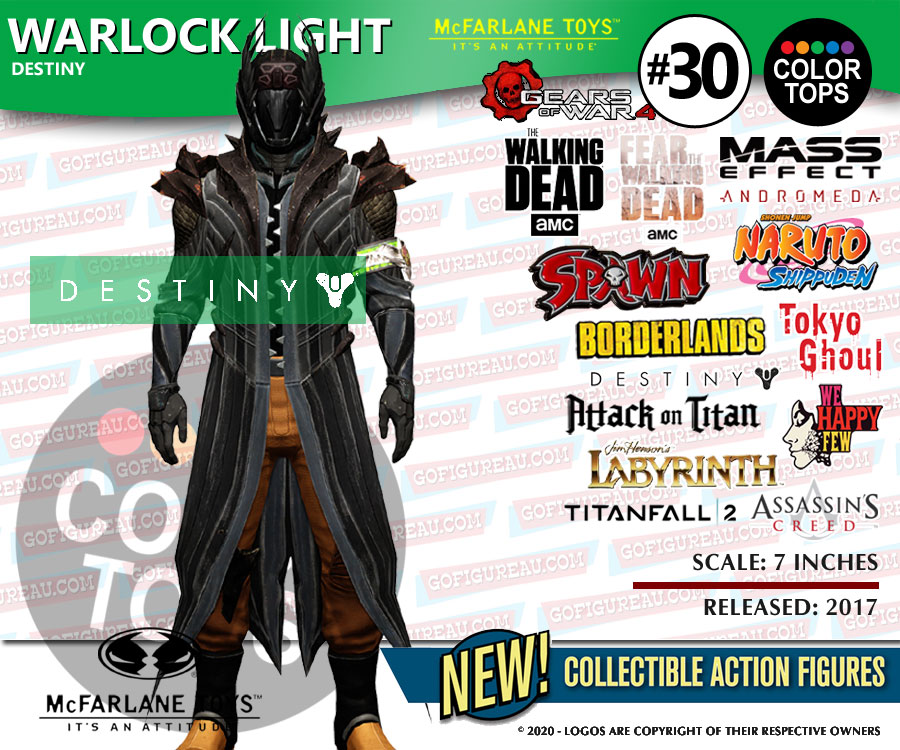 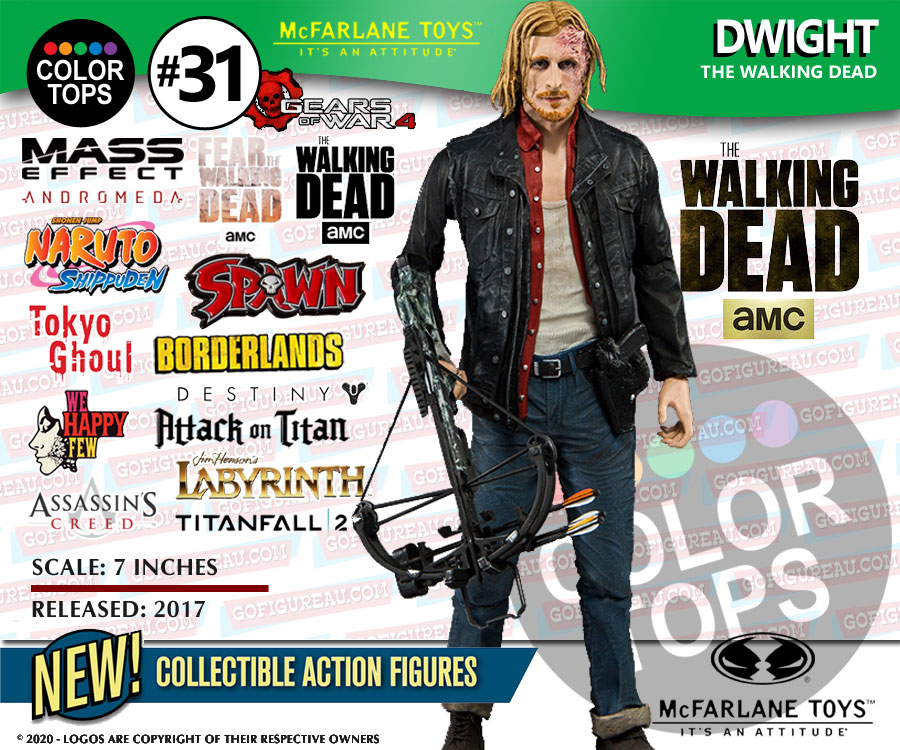 Dwight, often referred to as “D,” is a high ranking member of The Saviors and is seen as Negan’s “right hand man.” A manipulative individual, Dwight initially garnered the trust of Daryl and other survivors before luring them into Negan’s capture.

This figure stands 7 inches tall and comes with Daryl’s crossbow and sidearm pistol. Dwight is sculpted in his iconic outfit from Season 7 of AMC’s The Walking Dead. 14+ points of articulation. Stylized display base included.

Swearing revenge on the Titans for destroying his home and devouring his mother, teenage boy Eren Jaeger joins an elite group of soldiers, known as the Scout Regiment to help combat the Titans and take back his world. Eren’s drive makes him impulsive, hardheaded, but passionate to protect humanity and free them from the fear of the Titans. 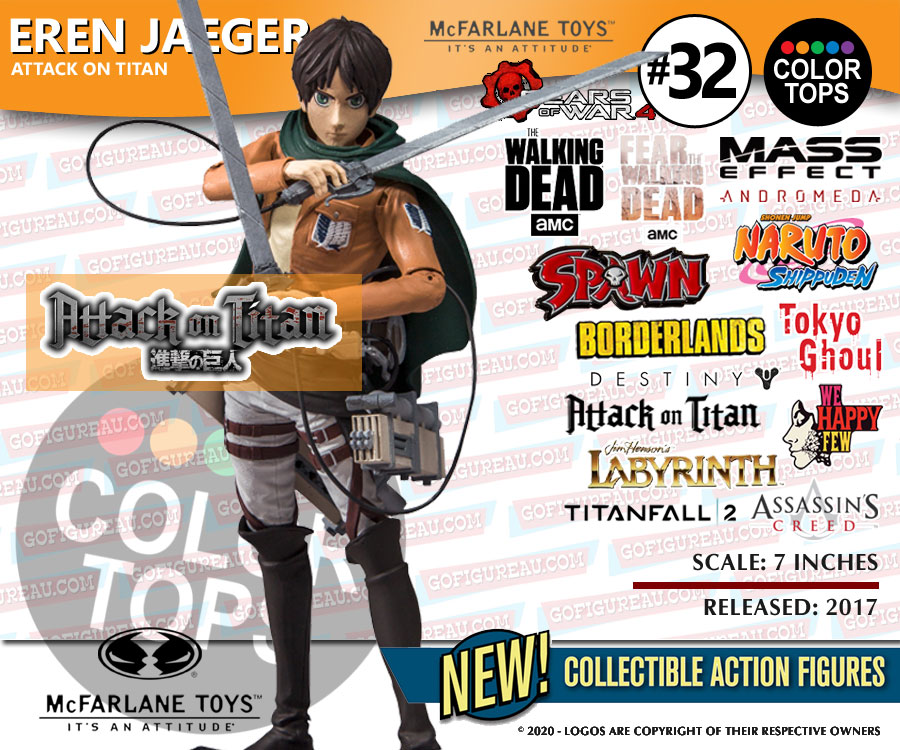 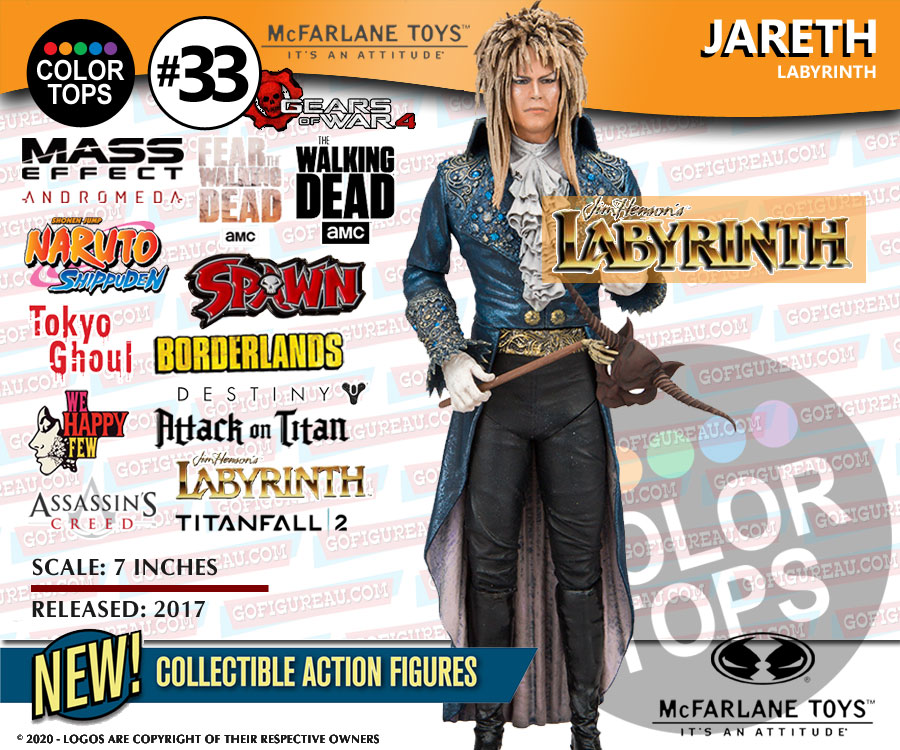 A mystical figure possessing powers of transformation, Jareth, is the Goblin King of the Labyrinth. With an ability to create crystal orbs within his hands, Jareth is able to use them to create various illusions to entrance and manipulate others. Despite ruling over the Goblins, Jareth resents this position and often dreams of a different life. 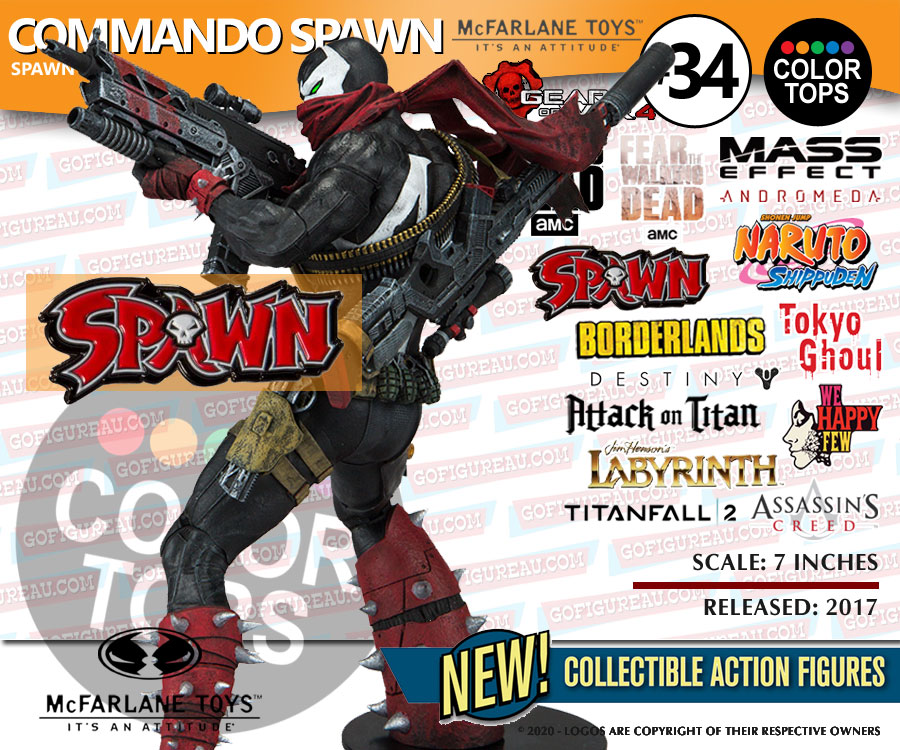 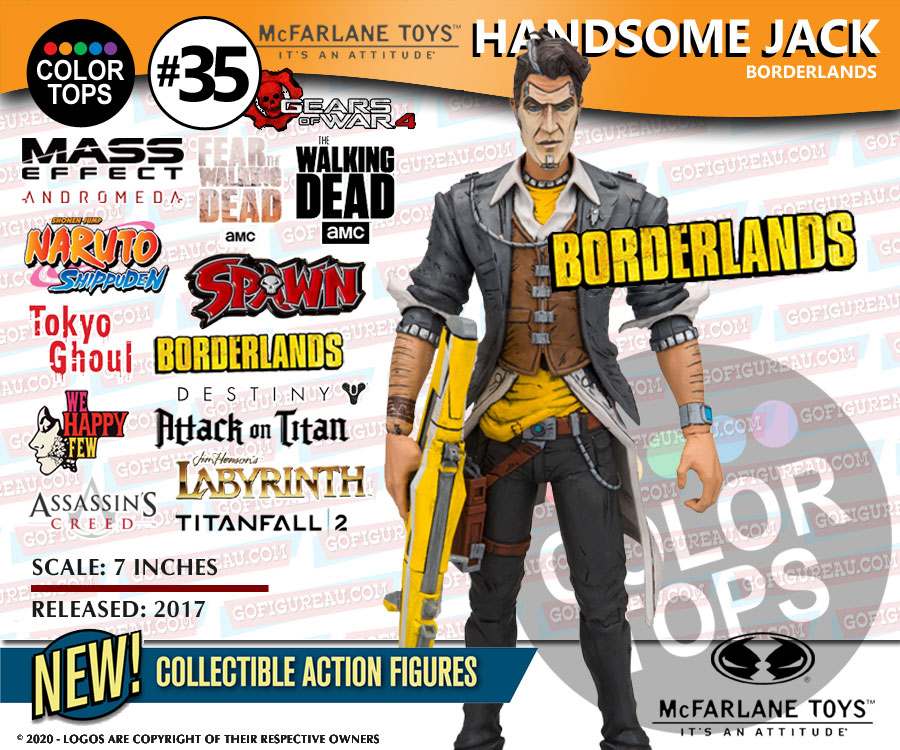 After taking over the Hyperion corporation, Handsome Jack declared himself dictator of Pandora, and takes full credit for finding The Vault. Nestled in his geostationary “H-shaped” moon base, Jack can send supplies and troops down to Pandora, and most importantly can keep an eye on Vault Hunters at all times.

Tiny Tina is an unstable thirteen year old explosives expert who, along with her parents, was sold into slavery to become a test subject for Handsome Jack’s mutation experiments. This event eventually led to the death of Tina’s parents, and while she was able to escape this fate with the help of a grenade hidden in her dress, Tina has vowed revenge on the man who sold her and her family. 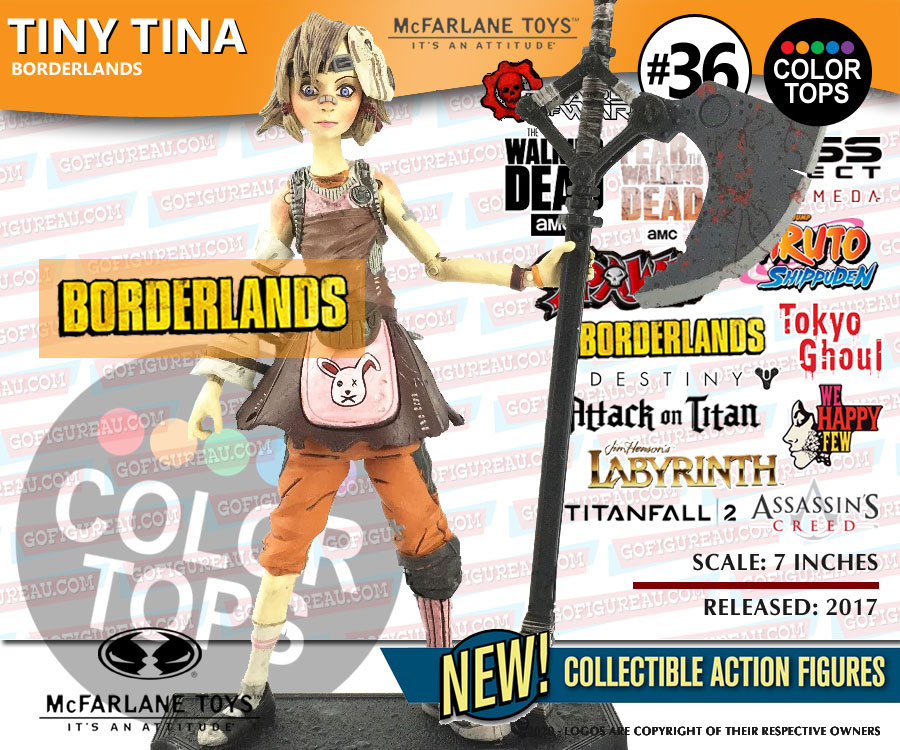