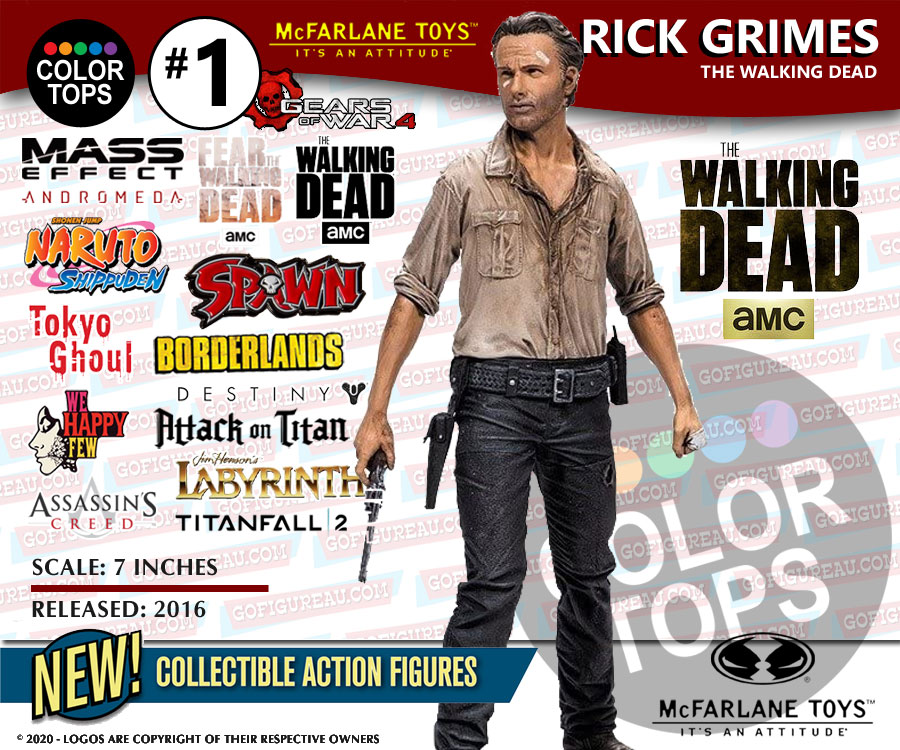 Begin your hunt for in-demand figures from the new larger size and incredibly detailed  McFarlane Toys Rick Grimes action figure. From the record shattering hit television show, AMC’s The Walking Dead, Rick, the hardened Sheriff’s Deputy, does whatever it takes to protect his family and fellow survivors from both the walking dead and the living. He and others continue to seek refuge in a desolate and post-apocalyptic world.

Continue your hunt for in-demand figures with the new, larger size and incredibly detailed McFarlane Toys Michonne action figure. From the record-shattering hit television show, AMC’s The Walking Dead, Michonne, a fierce survivor and main character, kept much of her past a secret. Now that she no longer wants or needs to be alone, Michonne has accepted her role as protector and confidant of Rick Grimes. She reluctantly picks up her katana and acknowledges that no one can leave behind the savagery of this post-apocalyptic world. 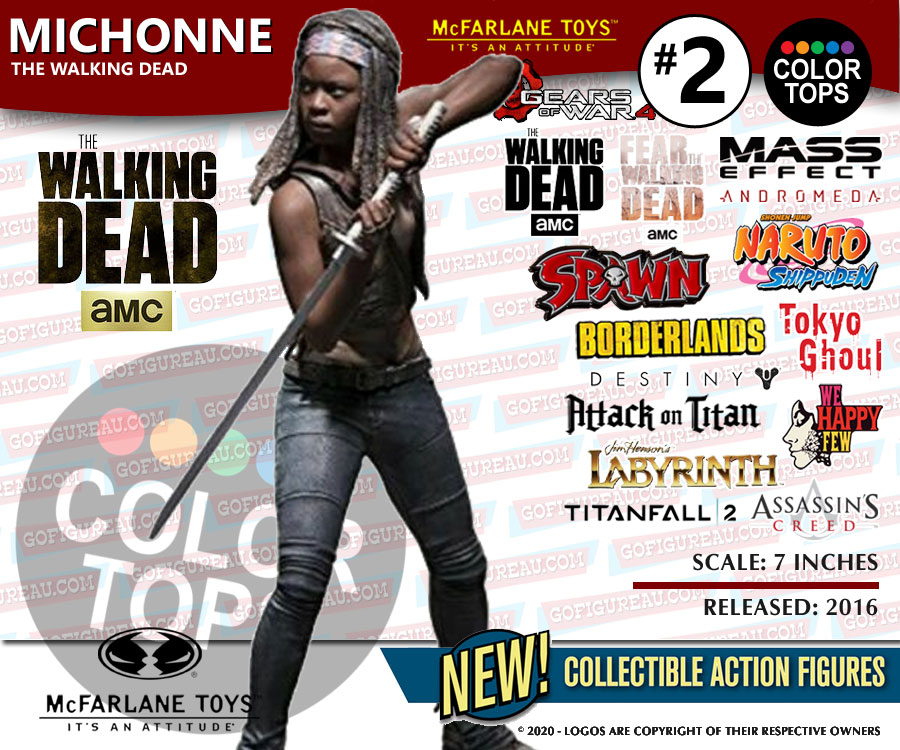 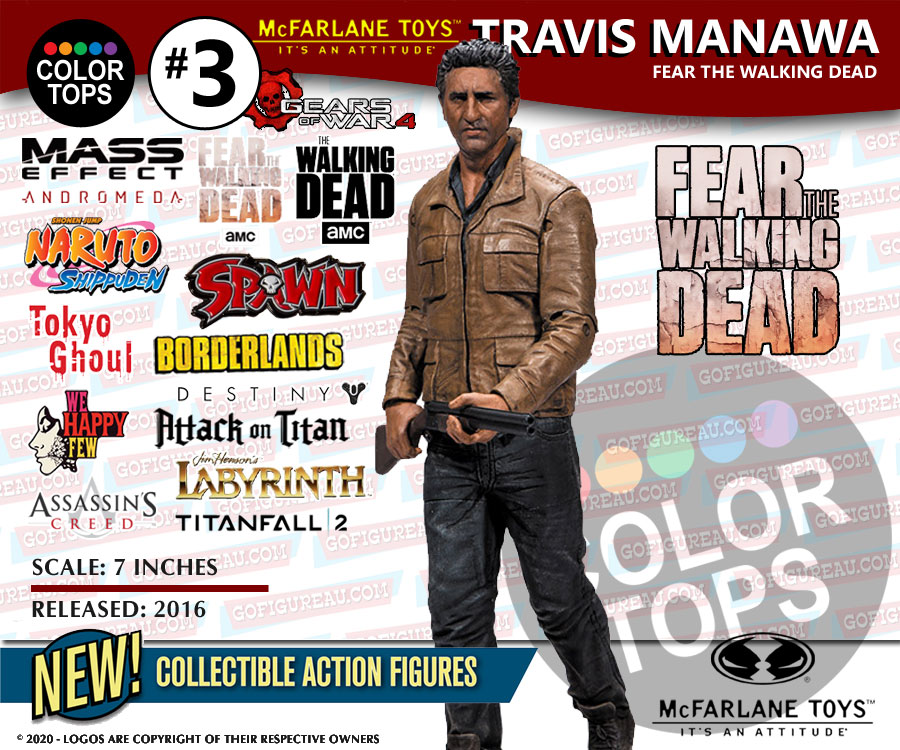 A good-natured man thrust into the horror of the apocalypse, Travis Manawa does whatever he can to keep his family safe.  However, belief that everything can be fixed with a little work is challenged when pure existence on Earth becomes a  constant fight for life or death. A man trying to constantly cling to his humanity is forced to not only watch his family start to loose their humanity, but has to go against his morals or else his family will die.

This figure features Travis in his outfit based on Season One of AMC’s Fear the Walking Dead, and includes Daniel Salazar’s shotgun, and standee base.

Strong, resilient, school counselor and single mother Madison Clark found a companion in Travis Manawa. Both struggled over the difficulty merging their two very different families when they became engaged, but everything became literal hell on earth when the world around them collapsed. Her endurance was put to the test because not only does she have to survive, but has to keep every member of her family from falling off the rails and becoming a victim of the apocalypse.

Comes with a hammer, fire extinguisher and figure base. Spectacular actor likeness for Madison Clark sculpted from images of Kim Dickens. Sculpted in her outfit worn in Season 1 of AMC’s Fear the Walking Dead. 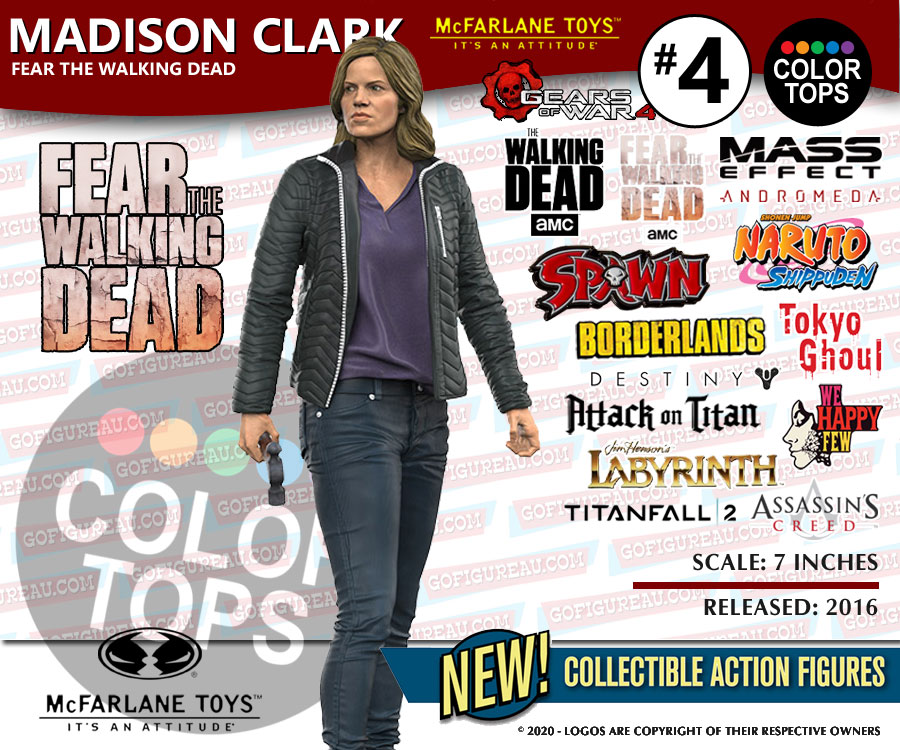 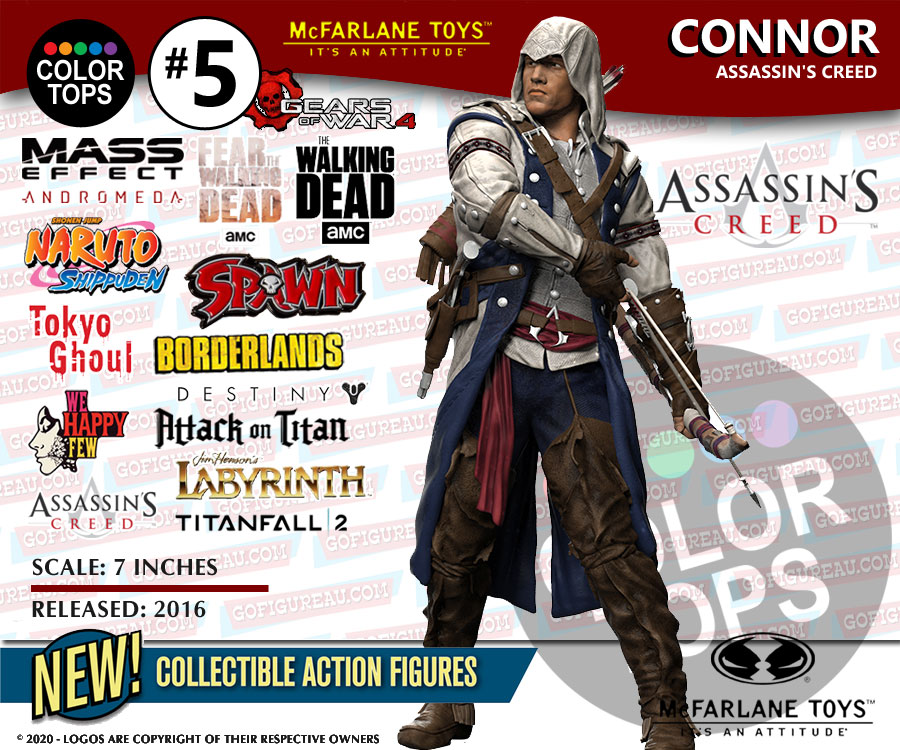 Ratonhnhaké:ton, of Native American and English heritage. Adopting the name Connor, he becomes the new voice for justice in the ancient war between the Assassins and Templars!

Daryl Dixon’s ability to use whatever he has at his disposal to survive and protect his friends has made him a key member of Rick’s group. Even during a knock down drag out brawl in the first half of season 5 of AMC’s The Walking Dead, Daryl prevailed by ripping the head off a walker to knock out his combatant.

This 7 inch figure comes equipped with a crossbow, knife and a Walker head with spine. 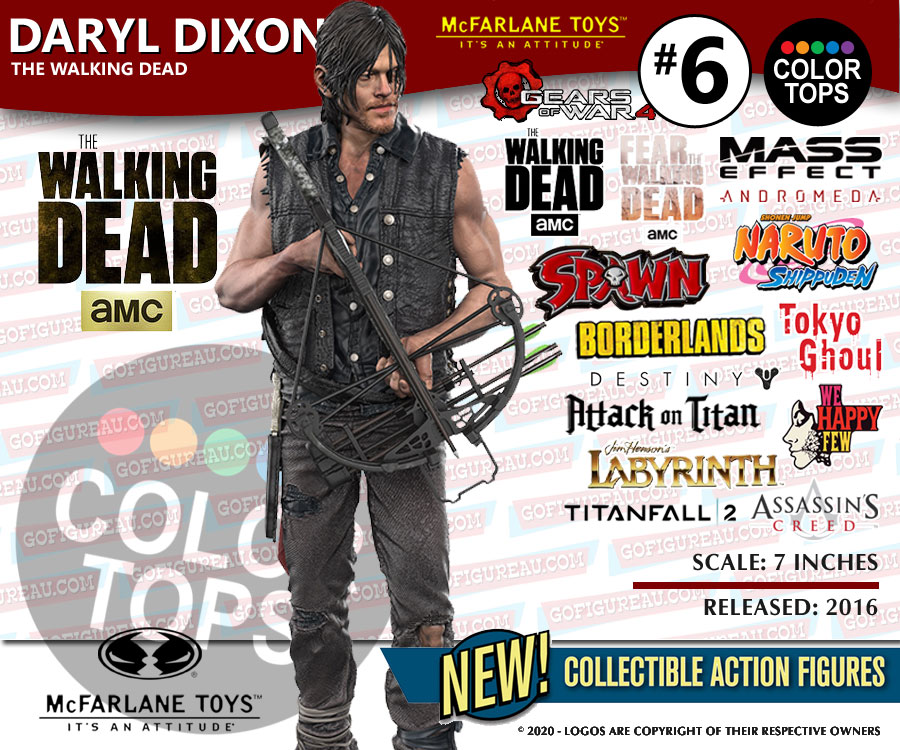 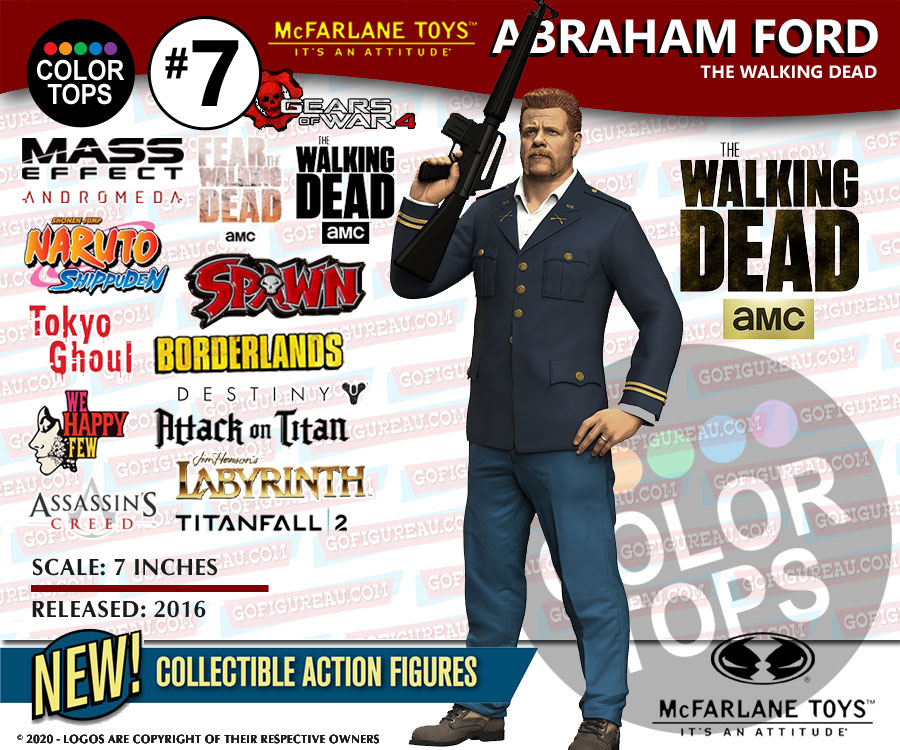 Abraham Ford was a lost man who found purpose in joining and becoming a core member of Rick Grimes’ survivors. Dressed in Army Dress Blues he finds during a scouting mission, he dons a garment sentimental to his past military career and begins to embrace his new outlook in this life.

This 7 inch figure comes with a grenade launcher and assault rifle.

Titanfall 2 is among the most hotly-anticipated video game sequels in history, featuring revolutionary Multiplayer that offers brand new Titans, expanded Pilot abilities and deeper customization to elevate the fast paced and exciting game-play fans expect from the series. 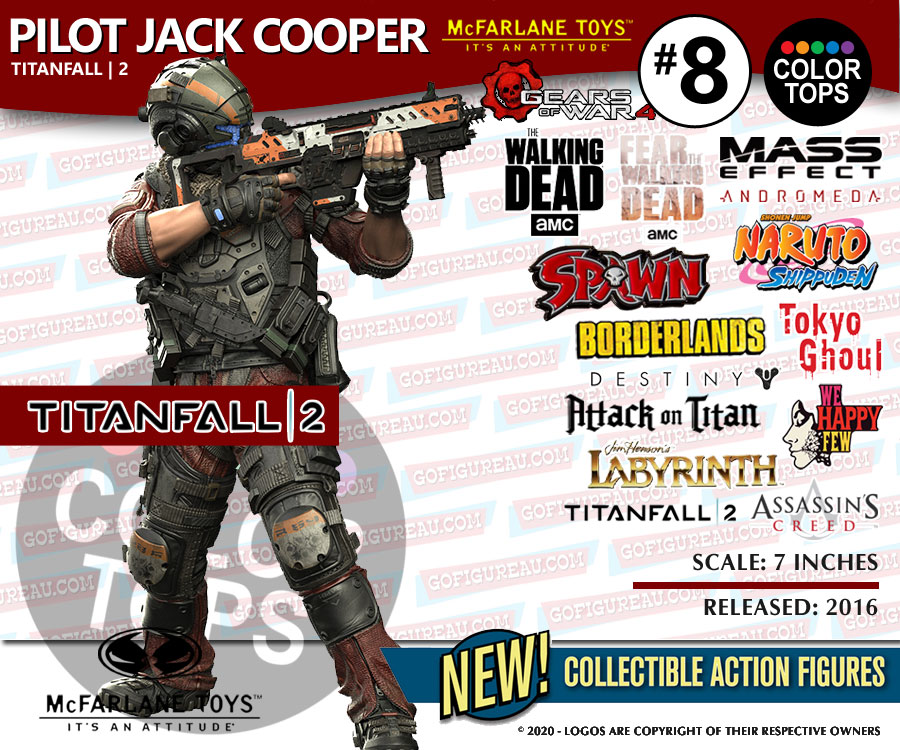 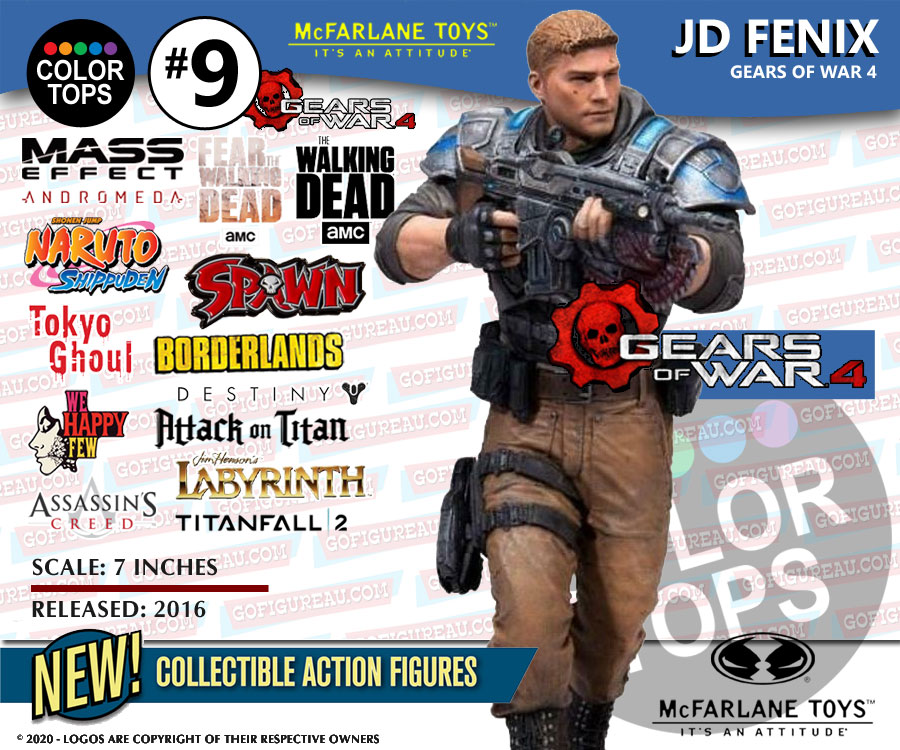 JD Fenix and his friends, Kait and Del, must rescue the ones they love and discover the source of a monstrous new enemy.

Al Simmons, resurrected from the ashes of his own grave with the powers of darkness is reborn as a creature from the depths of Hell– a Hellspawn. Now, Spawn must choose between his life on Earth and his place on a throne in Hell.

This figure stands 7 inches tall and comes equipped with an assault rifle and pistol. Spawn is sculpted in his signature black and white Spawn costume, complete with iconic red cape and spiked gauntlets. Stylized display base included. 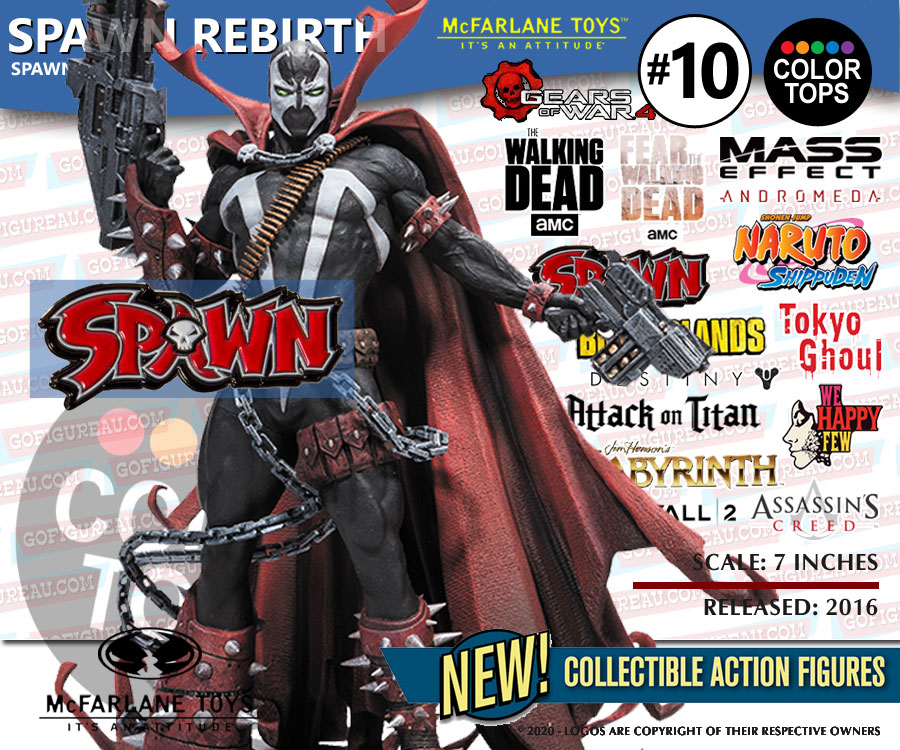 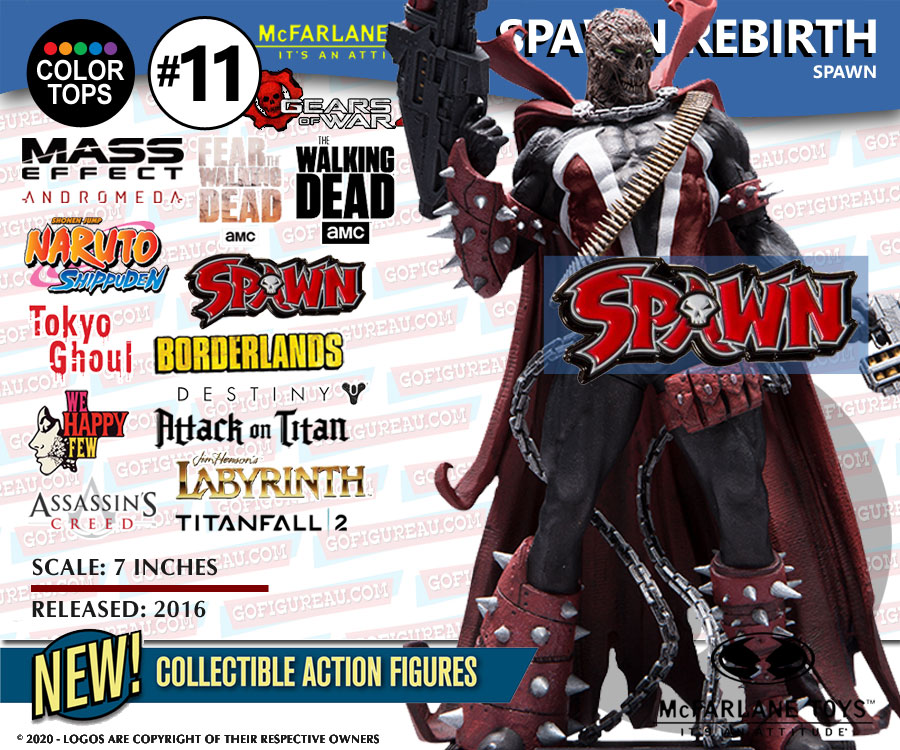 Resurrected from the ashes of his own grave in a flawed agreement with the powers of darkness, Simmons is reborn as a creature from the depths of Hell — a Hellspawn. Now Spawn must choose between his life on Earth and his place on a throne in Hell.

Aguilar is a warrior in 15th century Spain, during the Inquisition. An Assassin who fights for freedom against powerful forces seeking to eradicate it. 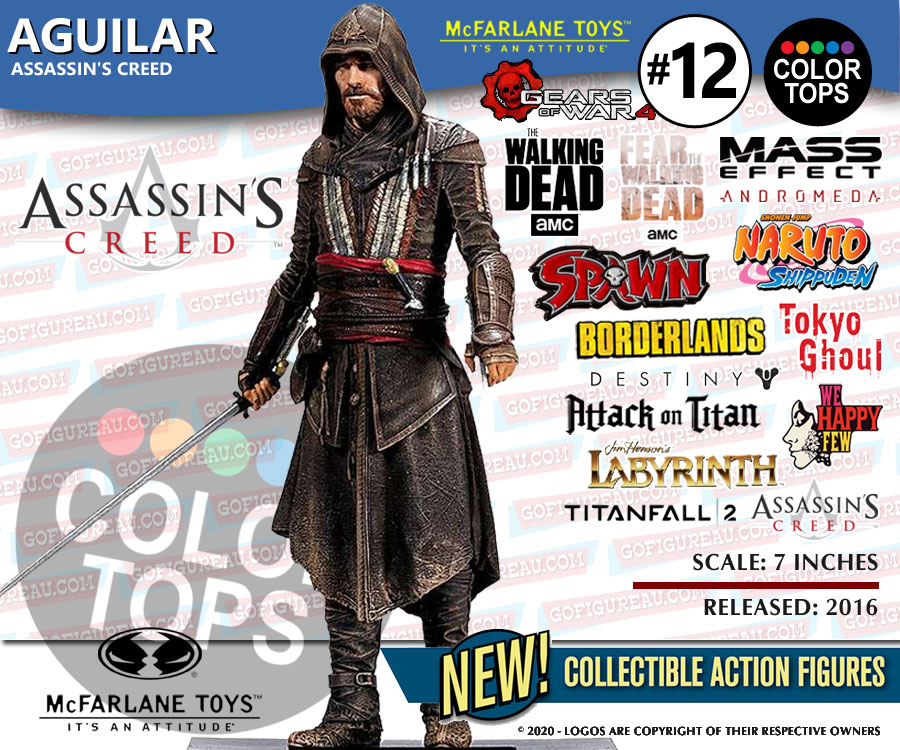